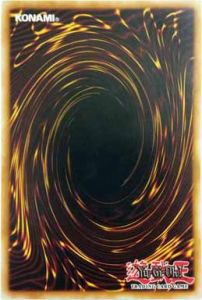 The Yu-Gi-Oh! Trading Card Game is a Japanese collectible card game developed and published by Konami. It is based on the fictional game of Duel Monsters created by manga artist Kazuki Takahashi, which is the main plot device during the majority of the manga franchise, Yu-Gi-Oh!, and its various anime adaptations and spinoff series.

In the trading card game, players draw cards from their respective decks and take turns playing cards onto "the field." Each player uses a deck containing forty to sixty cards, and an optional "Extra Deck" of up to fifteen cards. There is also an optional fifteen card side deck, which allows players to swap cards from their main deck and/or extra deck between games. Players are restricted to three of each card per deck and must follow the Forbidden/Limited card list, which restricts selected cards by Konami to be limited to two, one, or zero. Each player starts with 8,000 "Life Points", with the main aim of the game to use monster attacks and spells to reduce the opponent's Life Points. The game ends upon reaching one of the following conditions.

Below is a complete database of the Yu-Gi-Oh! TCG. Click on one of the sets below to view the cards in that set. Click on a card to add it for sale, trade or a wishlist / collection. The below database of sets and cards is programmed to automatically update with the latest releases.

Ghosts From the Past: The 2nd Haunting

Ghosts From the Past: The 2nd Haunting

Ghosts From the Past

Dragons of Legend: The Complete Series

Rise of the Duelist

Yu-Gi-Oh! The Dark Side of Dimensions Movie Pack Secret Edition

Speed Duel: Trials of the Kingdom

Fists of the Gadgets

Speed Duel: Attack from the Deep

Structure Deck: Order of the Spellcasters

Legendary Duelists: Sisters of the Rose

Yu-Gi-Oh! The Dark Side of Dimensions Movie Pack Special Edition

The Lost Art Promotion A

Code of the Duelist

Yu-Gi-Oh! The Dark Side of Dimensions Blu-ray & DVD promotional card

Yu-Gi-Oh! The Dark Side of Dimensions Movie Pack: Gold Edition

Duelist Pack: Rivals of the Pharaoh

Yu-Gi-Oh! The Dark Side of Dimensions Movie Pack

Premium Gold: Return of the Bling

Noble Knights of the Round Table Box Set

Legacy of the Valiant

War of the Giants: Round 2

War of the Giants Reinforcements

Judgment of the Light

Battle Pack 2: War of the Giants

Lord of the Tachyon Galaxy

Return of the Duelist

Gates of the Underworld Structure Deck

Starter Deck: Dawn of the Xyz

Force of the Breaker

Power of the Duelist

Structure Deck: Lord of the Storm

Structure Deck: Fury from the Deep

Soul of the Duelist

Yu-Gi-Oh! The Duelists of the Roses promotional cards