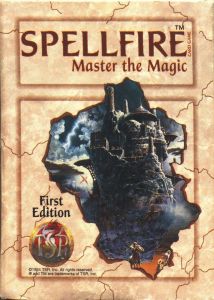 Spellfire: Master the Magic is an out-of-print collectible card game (CCG) created by TSR, Inc. and based on their popular Dungeons & Dragons role playing game. The game appeared first in April 1994, shortly after the introduction of Magic: The Gathering, in the wake of the success enjoyed by trading card games. It was the second CCG to be released, preceding Wizards of the Coast's second CCG Jyhad by two months.

Spellfire can accommodate any number of players with no need for changes to the rules. The players try to put six Realms cards into play, and can play one per turn. Holdings cards can be played on a Realm (one per Realm) to give it special qualities that help defend it from attack. Heroes, Wizards, Clerics, Monsters, Spells, Magic Items, Artifacts, Allies and Events are used to defend a player's realms and also to attack the realms of other players. After a realm is successfully attacked, it is considered razed and turned face down, and can only be restored through the use of other cards.

Realms - Realms represent kingdoms, cities, and empires from the AD&D worlds that have sided with the player in question. The game can be won only by playing realms. It is common for a player's opponents to attack his realms or to destroy them by other means, such as spells or events. Realms are played in a pyramid-shaped formation and must be played from front to back.

Champions - During his turn, a player may play champions into his "pool." He may also outfit them with magic items and artifacts. Champions are probably the most important cards in the game, as they are used to attack and defend realms. The types of champions in the original game were heroes, monsters, clerics, and wizards; later, psionicists, regents, and thieves were added.

If the player at any time had no realms, razed or unrazed, in his formation, all of the cards in his pool would be discarded at the end of his turn.

Below is a complete database of the Spellfire CCG. Click on one of the sets below to view the cards in that set. Click on a card to add it for sale, trade or a wishlist / collection. If you find any errors in the database, please contact us using the feedback form at the bottom of the page.