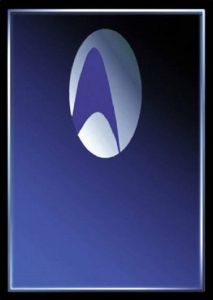 The Star Trek Customizable Card Game is an out-of-print collectible card game based on the Star Trek universe. The name is commonly abbreviated as STCCG or ST:CCG. It was first introduced in 1994 by Decipher.

The standard central goal for a player of STCCG is to obtain 100 points, primarily by completing missions or objectives. This is done by bringing personnel, ships and equipment into play, then moving an attempting team to a mission. Once a mission attempt starts, the personnel will create away teams to encounter dilemmas which will challenge them in some way. Often if the personnel have the required skills or attributes they can overcome certain dilemmas' effects. Once the required dilemmas are passed, the personnel still active in the attempt must have the skills and/or attribute totals required by the mission to solve it. If the mission is solved, the player earns the printed points.

Other aspects of the game increase player interactions: ships and personnel can battle, or otherwise affect each other; cards like events and interrupts can alter the environment for one or more players; and points can be scored using methods other than mission solving.

One of the most attractive themes of the game is affiliations. These are groupings of ships and personnel based on the major interstellar powers of the Star Trek universe, and decks will be based around one, or perhaps more, of these groups.

Following Decipher's ceasing production of Star Trek CCG, a group of players formed "The Continuing Committee" to continue to release fan expansions and to oversee tournaments. To date, they have released more content for the game than Decipher did! They support both First and Second editions of the Star Trek CCG. Their expansions add great variety, depth and balance, while still holding true to the spirit of the original games.

The official website of "The Continuing Committee" for Star Trek First Edition is www.trekcc.org/1e.

If you like what they do, consider supporting their work here.

Below is a complete database of the Star Trek CCG First Edition. Click on one of the sets below to view the cards in that set. Click on a card to add it for sale, trade or a wishlist / collection. If you find any errors in the database, please contact us using the feedback form at the bottom of the page.

B
Blaze of Glory

T
The Trouble With Tribbles

A
All Good Things

A
Away Team Pack