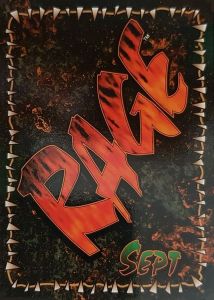 After quiring the licence from White Wolf, FRPG produced a new version of the Rage with the same card backs and set in the same world, but with completely different mechanics making it incompatible with the first version of the game.

The second version of the game had seven card sets. The first 6 were numbered and released once a month. They were known as Phase 1 through 6. The final set, Equinox, combined together three of the smaller numbered sets (7-9) into one larger set.

Below is a complete database of the Rage: Tribal War CCG. Click on one of the sets below to view the cards in that set. Click on a card to add it for sale, trade or a wishlist / collection. If you find any errors in the database, please contact us using the feedback form at the bottom of the page.