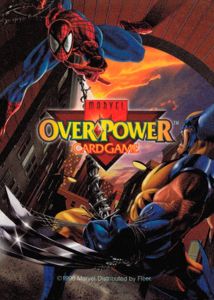 OverPower is an out-of-print collectible card game produced by Fleer Corporation originally featuring characters from Marvel Comics and later from DC Comics and Image Comics. The game was initially launched in August 1995. In the game, two players went head-to-head with teams of four heroes and villains. Unlike most other collectible card games of the mid-1990s, OverPower was very distinct strategically and structurally different from Magic: The Gathering.

OverPower was the very first superhero CCG. Followers were i.e. VS system. Marvel Interactive only produced two sets, Image and X-Men, both of which were fraught with delays and printing difficulties. After X-Men CCG was released in 1999, Overpower enjoyed no more official support. Eventually, Marvel decided to sell the exclusive rights to produce a collectible card game based on Marvel characters to Wizards of the Coast.

The game is designed by Michael Stern and Theodore Stern. Marvel Overpower, DC Overpower and Image Overpower all have different back designs.

A deck typically consists of any combination of four heroes and/or villains, three in the frontline and one in reserve. The rest of the deck consists of fifty-one cards representing offensive and defensive actions that can be taken by the characters or their allies. Each player also chooses a set of 7 mission cards, that represent their team's goals. Finally, each player may also have a homebase and/or a battlesite that represent where their team is from and where the battle will take place. The goal of the game is to either KO the opponent's entire team, or to complete all 7 mission cards (or defeat all 7 of the opponent's).

Players take turns playing attacks back and forth. During a battle, characters may become hurt, and if they are hurt enough, they may be KO'd and eliminated. In addition, each team ventures a number of mission cards, and the winner of the battle completes those missions, while the loser's missions are defeated. If neither team concedes, the team that did more damage to the other is the winner.

Below is a complete database of the OverPower CCG. Click on one of the sets below to view the cards in that set. Click on a card to add it for sale, trade or a wishlist / collection. If you find any errors in the database, please contact us using the feedback form at the bottom of the page.