Doctor Who: Battles in Time 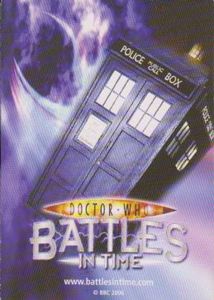 The nationwide release of this set was announced in a press release from GE Fabbri Ltd. on 7 June 2006, with the launch date confirmed on 12 September 2006.

They launched later in September 2006 along with the magazine, the first issue included two packs of cards, and an exclusive "Psychic Paper" card, which had a window of red cellophane that allowed you to read hidden messages on six bonus cards. Additional packs were also available to purchase separately.

Below is a complete database of the Doctor Who: Battles in Time CCG. Click on one of the sets below to view the cards in that set. Click on a card to add it for sale, trade or a wishlist / collection. If you find any errors in the database, please contact us using the feedback form at the bottom of the page.

Doctor Who: Battles in Time