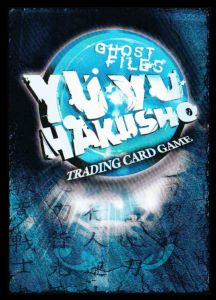 The Yu Yu Hakusho Trading Card Game was first published in 2003 by Score Entertainment, and is based on the anime and manga series YuYu Hakusho (the series is spelled Yu Yu Hakusho in FUNimation's anime version and spelled YuYu Hakusho in the Viz English manga). It is a two-player tournament-styled collectible card game; each player uses a deck of forty-four or more cards that is headed by a team of four character cards. The game was discontinued in 2005.

The game is divided into five matches that consist of one-on-one fights between two character cards. The players alternate turns until one character is defeated, then move on to the next pair of characters. The game ends when one player wins three out of the five matches, or when one player cannot draw or discard a card from their deck. There are also a select few cards that allow one to win the game after performing a set amount of conditions.

Below is a complete database of the Yu Yu Hakusho TCG. Click on one of the sets below to view the cards in that set. Click on a card to add it for sale, trade or a wishlist / collection. If you find any errors in the database, please contact us using the feedback form at the bottom of the page.