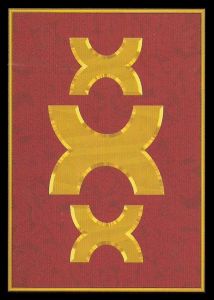 The basic mechanic of the game is laying out the cards in a certain pattern face down, flipping one of the cards, and then attempting to match the edges of the cards with edges of the same color. Each card has a different point total, and the first player to 100 points wins.

Each player brings his or her own deck to play, and the decks get hopelessly intermingled during play. Half the fun of the XXXenophile game is gaining cards that you did not originally have.

The artwork of the cards is NOT for young children, yet young adults of the age of fourteen or fifteen would enjoy it. The cards are not painted in an insulting way, and there is material for people of all sexual preferences within the artwork.

Cheapass Games’s James Ernest, the game designer who designed Kill Doctor Lucky and Button Men, created the design for play of the game.

In 2001 this game was reworked into a non-adult, non-collectible card game called Girl Genius: The Works, based on the Foglios' comic Girl Genius.

Below is a complete database of the XXXenophile CCG. Click on one of the sets below to view the cards in that set. Click on a card to add it for sale, trade or a wishlist / collection. If you find any errors in the database, please contact us using the feedback form at the bottom of the page.