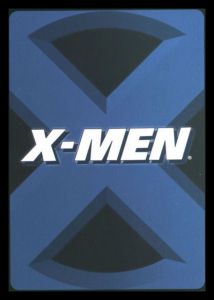 The X-Men Trading Card Game was a joint-release of Wizards of the Coast, Inc. (WotC), Marvel Entertainment, and Twentieth Century Fox. All three companies involved with the game required that certain stipulations be met in the final product. WotC was responsible for the structural design of the game; Marvel was to provide the artwork; Fox determined the overall look of the characters depicted in the cards.

The game was released in the summer of 2000. Delays with the Marvel art department meant that the booster packs did not hit store shelves for months after the release of the starter decks.

An expansion set, "Generations", had been designed and created (solely by WotC) very shortly after the release of the base set. A 100-card set—never produced but printed on mock-up sheets dubbed the Generations God Book by WotC staff—would have featured new X-Men such as Iceman, Gambit, Cable, Nightcrawler, and White Queen, and villains including Pyro, Lady Death strike, Arcade, Spiral, and the Acolytes. It would also have introduced split-color cards that counted as the color of the player's choice. With WotC working independently of outside parties, the set was ready, complete with final text and card art, ahead of schedule.

The game's only promotional cards featured Halle Berry, Famke Janssen, Anna Paquin, Patrick Stewart, Hugh Jackman, and James Marsden as their respective movie characters. The Hugh Jackman "Wolverine" card was distributed at cinemas to moviegoers purchasing tickets to X-Men and the Halle Berry Storm card was given to customers at hobby and game shops. The remaining promotional actor cards were slated to be awarded as prizes at sanctioned X-Men TCG events, but neither tournaments nor competitive leagues were ever established. Consequently, it is believed among fans of collectable cards that these undistributed promo cards rank among the all-time most-difficult acquisitions in all of collectable gaming.

Below is a complete database of the X-Men TCG. Click on one of the sets below to view the cards in that set. Click on a card to add it for sale, trade or a wishlist / collection. If you find any errors in the database, please contact us using the feedback form at the bottom of the page.