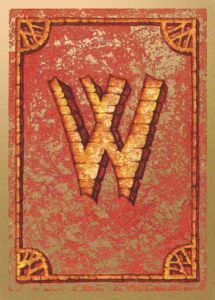 Wyvern is an out-of-print collectible card game featuring dragons and wyverns battling for treasure. The game was produced by U.S. Games Systems, with the first, "Premiere Limited", card set launched in January 1995. In 1997, the "Kingdom Unlimited" edition was released, featuring 277 cards, and marking the end of production.

Players begin with 6 face-down dragon and terrain cards on the battlefield, as well as 25 gold painted pieces. The game ends when one player no longer has any deployed dragon or terrain cards; this player is the loser. At the end of the game, a scoring system is used which rewards players for resourceful use of their assets (25 points + 1 [point for each gold piece remaining). The loser scores his remaining gold pieces divided by 2, rounded down. Multiple games are typically played to form a match, which ends when one player reaches a certain score. The objective is thus to defeat the opponent's army while expending as few of one's own resources as possible.

Each turn, players can perform limited card movement, play actions, and initiate a single battle. As play progresses, dragon and terrain cards which were turned face down are turned face up and the cost to do so is paid. Conceptually, one wants to defeat the opponent's cards using the appropriate counter-measures. Dragons defeat weaker dragons, but are vulnerable to terrain effects. Very weak dragons called scouts are designed to defeat terrain, but guessing where an opponent has a terrain card (when face-down) can be difficult. Dragons can be augmented with treasure for an additional cost, but running out of gold is a constant peril.

Below is a complete database of the Wyvern CCG. Click on one of the sets below to view the cards in that set. Click on a card to add it for sale, trade or a wishlist / collection. If you find any errors in the database, please contact us using the feedback form at the bottom of the page.