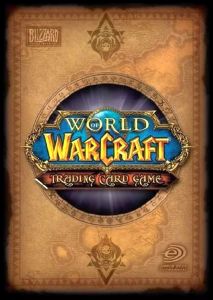 Each player uses a hero card and a deck consisting of allies and other supporting cards, such as weapons, abilities, armor, items and quests. Many cards include a trait icon, which limits what heroes can include the card in their decks. Some booster packs also contain legendary rares, or loot cards (i.e. special versions of normal cards) which contain a scratch-off code. This code can then be redeemed in the online game for a virtual prize. The prizes include special tabards, gimmick items, non-combat pets, and mounts.

During play, players start with a single hero. Once per turn, players can play any card from their hand as a resource, which enables the payment of additional cards to augment the hero's powers or add additional members to his or her party. Once brought into play by paying the appropriate cost, all cards (except abilities) remain until destroyed or removed from play. As in games such as Magic: The Gathering, the goal is to reduce the remaining health of the opposing hero to zero. Unlike Magic, combat attacks are always directed at individual heroes or allies, rather than simply declaring an attack with a number of creatures. Furthermore, damage done to characters accumulates between turns, making combat more expensive for both the attacker and defender.

On August 23, 2013, Blizzard Entertainment announced that the TCG would be discontinued, and that they would not be renewing the game's license. In March 2014, Blizzard released Hearthstone: Heroes of Warcraft, an online collectible card game featuring many of the same characters, abilities and artwork.

Below is a complete database of the World of Warcraft TCG. Click on one of the sets below to view the cards in that set. Click on a card to add it for sale, trade or a wishlist / collection. If you find any errors in the database, please contact us using the feedback form at the bottom of the page.

T
Through the Dark Portal

M
March of the Legion

S
Servants of the Betrayer

T
The Hunt for Illidan

B
Blood of Gladiators

W
War of the Elements

T
Twilight of the Dragons

T
Throne of the Tides

C
Crown of the Heavens

T
Tomb of the Forgotten

B
Betrayal of the Guardian

A
Assault on Icecrown Citadel

B
Battle of the Aspects