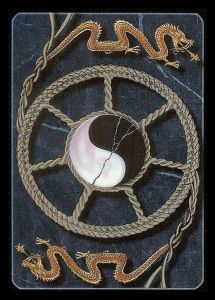 Opposing players represent the forces of good or evil and reenact the epic struggle for victory as told in Jordan's books. While building up forces in the form of supporting characters and troops, and enhancing them with powerups, the player tries to weaken the opponent by hampering them with effects and inflicting damage during battles. These battles are fought over "challenges", missions that each player can initiate. The winner of the challenge receives a specific reward as specified by the challenge. The dice are used to generate four different kind of abilities, needed for recruiting characters, doing damage, and generating support or opposition during the challenges and the Last Battle.

Players try to obtain dominance by controlling the "Pattern", which is accomplished by winning the Pattern challenge that is initiated each turn. Dominance gives a player the advantage of knowing what the opponent does before acting himself. When the Pattern is filled with 20 tokens, the game's final act commences: The Last Battle. All characters and troops able to fight must enter the battleground for this epic clash. Rounds of battle are fought until one player has generated more than five support over the opponent's total opposition; that player wins the game. The other way to win is by eliminating the opponent's starting character.

Below is a complete database of the Wheel of Time CCG. Click on one of the sets below to view the cards in that set. Click on a card to add it for sale, trade or a wishlist / collection. If you find any errors in the database, please contact us using the feedback form at the bottom of the page.