Warlord: Saga of the Storm CCG 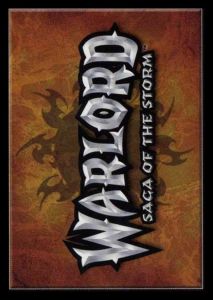 Warlord: Saga of the Storm is a collectible card game designed by Kevin Millard and David Williams. It was produced by Alderac Entertainment Group since its introduction in April 2001 until January 2008, when they announced they were ceasing its production.[In place of AEG, German company Phoenix Interactive licensed the rights to produce the game and printed their first set, Fourth Edition, in July 2008. The longer official name is almost always shortened to Warlord and the subtitle "Saga of the Storm" is often used informally to refer to the original base set of cards. The game is unrelated to an earlier, similarly named CCG, Warlords.

Warlord is based on the Rank & File system which in turn borrows basic elements from the d20 system. Originally intended as an easy-to-learn second game for players already familiar with d20 fantasy role-playing games, Warlord is often marketed with the tagline, "The game you already know how to play". Warlord was permanently discontinued by AEG and Phoenix Interactive in early 2012, approximately one decade after its initial release.

Below is a complete database of the Warlord: Saga of the Storm CCG. Click on one of the sets below to view the cards in that set. Click on a card to add it for sale, trade or a wishlist / collection. If you find any errors in the database, please contact us using the feedback form at the bottom of the page.

S
Saga of the Storm

E
Eye of the Storm