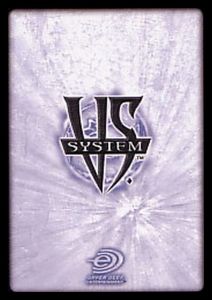 Vs. System (short for Versus System), also written as VS System and abbreviated as VS, is a collectible card game designed by Upper Deck Entertainment (UDE). In the game, players build and play a deck of Vs. System cards in an attempt to win a game against their opponent. It was first published in 2004 and is set in the superhero genre. The game was discontinued by Upper Deck Entertainment in January 2009.

UDE announced at the 2014 Gen Con Indianapolis that they would be letting convention-goers playtest a subset of Marvel Origins reprinted as "Vs. System Living Card Game". UDE then relaunched Vs. System at the 2015 Gen Con Indianapolis in its updated 2PCG format, switching from the traditional, partially-randomized card distribution model of most CCGs to a non-random, fixed-distribution model.

Below is a complete database of the VS System CCG. Click on one of the sets below to view the cards in that set. Click on a card to add it for sale, trade or a wishlist / collection. If you find any errors in the database, please contact us using the feedback form at the bottom of the page.

T
The Coming of Galactus