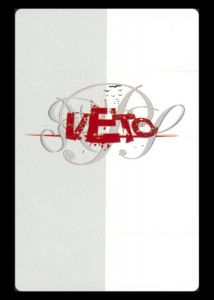 SGK Veto 2ed is the second edition of this title and the first Polish CCG game set in the historical times of the 17th century. Basically this game is a duel, but the rules introduce also other ways to win - dimplomacy, intrigues and using military force. At once up to 5 sides - factions - can play.

The plot of the game is settled in the historical reality of the 17th century, Poland's heyday, the times of the gentry, covering Europe and Asia. The designers also referred to the Polish historical and contemporary prose, like Henryk Sienkiewicz (Nobel prize winner) and Jacek Komuda.

In 2009 Kuźnia Gier became the publisher of the game. This new publisher reprinted the basic decks designed by Wydawnictwo Imperium and added a new starter deck of Osmanowie (the Ottoman Empire - this faction was introduced by the Casus Belli expansion in boosters). Kuźnia Gier released their first own expansion in 2009 and further two in 2010. The line is constantly expanded with new products.

Veto CCG has now seasons of the game (each season starts with releasing a set of sarter decks and contains next three expansions), which is connected with rotation of legal cards in the organized tournament system. So far Veto has had three full seasons: basic season (Veto 2ed, Charakternicy, Casus Belli, Ogniem i Mieczem), Warchoły i Pijanice (eng. "Dipsos and Troublemakers", inlcuding Ogniem i Mieczem (partly), Do szabel, Rębajłowie, Krwi) and Szpiedzy i Dyplomaci ("Spies and Dimplomats", including W niewoli, Spiskowcy, Królobójstwo). The current season is called Czarty i Upiory ("Devils and Ghosts") and will introduce a supernatural element to the otherwise historical game.

In July 2014 Historical Games Factory became the new publisher of the game.

Below is a complete database of the Veto: Second Edition CCG. Click on one of the sets below to view the cards in that set. Click on a card to add it for sale, trade or a wishlist / collection. If you find any errors in the database, please contact us using the feedback form at the bottom of the page.