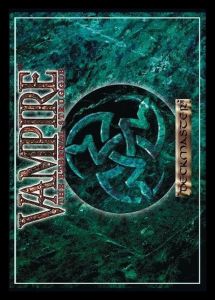 Vampire: The Eternal Struggle (published as Jyhad in the first or "Limited" edition and often abbreviated as V:TES) is a multiplayer collectible card game published by White Wolf Publishing. It was set in the World of Darkness.

The game was designed in 1994 by Richard Garfield and initially published by Wizards of the Coast and was the third CCG ever created. As Garfield's first follow-up to his popular Magic: The Gathering collectible card game, he was eager to prove that the genre was "a form of game as potentially diverse as board games". In 1995 the game was renamed from Jyhad to Vampire: The Eternal Struggle to increase its appeal and distance itself from the Islamic term jihad. Wizards published a player's guide Darkness Unveiled. After the 1996 Sabbat expansion, Wizards of the Coast abandoned the game, and in 2000 White Wolf took over development.

Below is a complete database of the Vampire the Eternal Struggle CCG. Click on one of the sets below to view the cards in that set. Click on a card to add it for sale, trade or a wishlist / collection. If you find any errors in the database, please contact us using the feedback form at the bottom of the page.

L
Lords of the Night

H
Heirs to the Blood