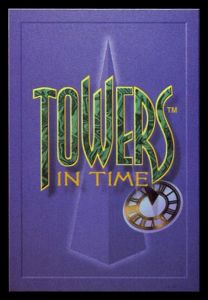 Towers of Time is an out-of-print collectible card game by Thunder Castle Games and was released in April 1995. The base set had 150 cards with 56-card starter decks and 8-card booster packs. The game was chastised for having starter decks that contained no rules, and instead players would have to call a non-toll-free number to obtain the rules. The rules were eventually printed in Scrye magazine issue #3. An "icon explanation" card, however, was included in the starter decks, but did not explain all the icons found on the cards. Thunder Castle Games announced at least four expansions for the game but none of them ever materialized: Greek, Zodiac, Amazon, and Norse.

Gameplay depicted the two players as wizards battling between dimensions. Players won by destroying his opponent's Five Shields with creatures, with each shield capable of taking 4 points of damage. There were 6 schools of color: Fire, Water, Air, Earth, White, and Black.

Below is a complete database of the Tower in Time CCG. Click on one of the sets below to view the cards in that set. Click on a card to add it for sale, trade or a wishlist / collection. If you find any errors in the database, please contact us using the feedback form at the bottom of the page.