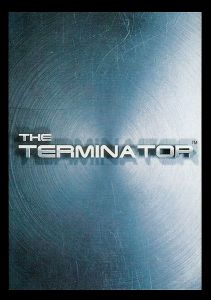 The Terminator is an out-of-print collectible card game by Precedence and is based on the movie from 1984. It was released in October 2000. The first and only set had 349 cards, although others claim 348 for a missing Extrapolate card. The game was cancelled one year before Precedence closed as a company.

The game closely resembles Aliens vs. Predator Collectible Card Game and is compatible. The game was said to have a role-playing feel as characters search for equipment, look for chances to attack, and comb the streets for characters important to the future. Gameplay involves one player assuming the role of Skynet trying to eliminate the other player who plays as the human Resistance. Players take turns by playing Location cards where they play Character cards. A player may win in one of three ways: eliminating all of your opponent's main characters, fulfill 10 Mission Points from Mission cards, or safeguard/eliminate 10 Importance points worth of supporting characters.

The game was criticized because in tournaments players would have to maintain two decks, one for Skynet and one for the Resistance.

Below is a complete database of the The Terminator CCG. Click on one of the sets below to view the cards in that set. Click on a card to add it for sale, trade or a wishlist / collection. If you find any errors in the database, please contact us using the feedback form at the bottom of the page.