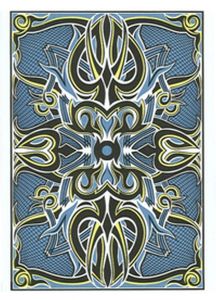 The Spoils is a collectible card game created by Tenacious Games and owned by Arcane Tinmen since January 2009. It launched with a free open beta in August 2006, and officially released for sale in November 2006. The Spoils was in development from 2001 to 2006. The design team is headed up by Josh Lytle, who also designed the collectible card game Magi-Nation Duel. Jon Finkel, a prominent player in Magic: the Gathering's Pro Tour, aided the development team as an advisor since 2002. The Spoils Card Game, while under the design direction of Ken Pilcher, won the Fan Favorite Origins Award for Best Collectible Card Game at the 2015 Origins Game Fair, beating other contenders including Legend of the Five Rings and Magic: The Gathering.

The Spoils uses a number of mechanics in common with other collectible card games. Unlike many games of this kind, you start the game with a Faction card in play, which determines how you begin your turn and which actions you are allowed to take. These Factions have special abilities, unique to each Faction card. Currently, 6 Faction cards are available to the public. Special foiled versions of this card were given away at Gen Con.

Players need to amass Resource cards in order to play other cards. Certain cards are "Staple" Resources and any number of these may be played in a deck. As of the Seed Cycle, there is a rare Resource for each trade. The Factions count as Staples as well, according to the bottom of the card. However, since these are set apart at the beginning of the game or whenever you shuffle your deck, the word Staple tends to refer to Resources. Most cards require between 1 and 4 of these Staple Resources in play to meet the threshold indicated by Resource icons on cards. The Resource icons come in the form of five trades.

To supplement the Staple Resources, players may play any card from their hand face down as a Resource; however, cards played face down in this manner will not count towards the Resource threshold.

Playable cards come in several types, not counting Staples: Characters, Items, Tactics, and Locations. Each of these types often have subtypes. To win the game, the opponent's Faction must be reduced to 0 influence. The Tournament Faction starts with 25 influence. The Faction's influence may be reduced by attacking it with Characters, or by using Tactics or special abilities. Characters have three stats: Strength (amount of damage the Character deals), Life (amount of damage needed to destroy the Character), and Speed (faster Characters deal their damage earlier).

The game was officially announced dead in the official sites forums after the company could no longer find investors for the product. This occurred in early 2008.

However, as of 20 January 2009, the company Arcane Tinmen have purchased the rights to The Spoils, and have hired several members of Tenacious Games to resume production. Fantasy Flight Games is the US distributor of Arcane Tinmen and had a viral marketing campaign at Gen Con 2009 about Spoils including T-shirts and promo cards.

Below is a complete database of the The Spoils TCG. Click on one of the sets below to view the cards in that set. Click on a card to add it for sale, trade or a wishlist / collection. If you find any errors in the database, please contact us using the feedback form at the bottom of the page.

S
Seed: Children of the Lingamorph

S
Shade of the Devoured Emperor