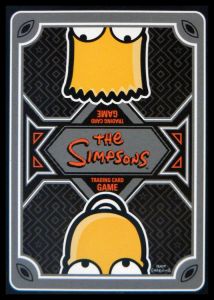 The Simpsons Trading Card Game is an out-of-print collectible card game by Wizards of the Coast based on The Simpsons TV series by Matt Groening. The game is not to be confused with the European version The Simpsons Sammelkartenspiel which looked similar but had entirely different gameplay mechanics and was released in 2001. The Simpsons TCG was first released in fall of 2003. The core set titled Krusty Approved had 156 cards. Four pre-made Theme decks were released.

Each player may play a Scene card (if that player doesn't have one in play), play Character cards at a Scene, declare an eligible scene completed or trashed, or play an Action card. At the end of a player's turn, they may discard as many cards as they like and draw up to 6 cards. Only Action cards can be played on another player's turn.

Below is a complete database of the The Simpsons TCG. Click on one of the sets below to view the cards in that set. Click on a card to add it for sale, trade or a wishlist / collection. If you find any errors in the database, please contact us using the feedback form at the bottom of the page.