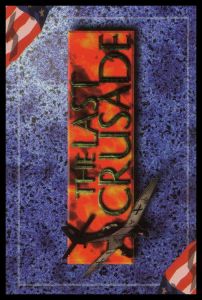 The Last Crusade is an out-of-print collectible card game originally published in December 1995 by Virginia-based Chameleon Eclectic Entertainment until the company closed in early 1999 at which time Pinnacle Entertainment Group took over production.

The card game simulates the war between the German Third Reich and the Allied Forces during the Second World War. The Last Crusade was designed by John R. Hopler, a World War II enthusiast who had initially been doing freelance writing and designing work for Chameleon Eclectic and made the transition to Pinnacle along with the card game.

The game uses historically accurate campaigns, weapons, locations, battlefronts and scenarios which players must manage strategically in order to bring their side to victory. Crusade can be played by two or more players each using a deck chosen to represent either the German or Allied Powers. It was also formatted to have the capability of a solitaire mode during which the cards can be used to play the classic one person card game. Despite the game's loss of popularity, online decks have been created and modified as recent as 2005 to include more weapons, countries and campaigns. These cards, while not an official part of the card game, have been adapted by devoted gamers who can print them out and add them to their collection.

Each individual game is played by two sides as either the commander of the U.S. or German army regiment. As commander, you will control the different elements of battle including armor, artillery, infantry, air units and support units, each represented by a playing card. The first expansion to the standard deck came in 2000 in the form of ’’’The Last Crusade: The Russian Front.’’’ This deck added 200 all-new cards to the game which included Russian terrain and scenarios prevalent in the war. It also included 120 cards from the original deck so it could it be the only purchase needed to wield a formidable fleet, regardless of which side a player chooses.

Below is a complete database of The Last Crusade CCG. Click on one of the sets below to view the cards in that set. Click on a card to add it for sale, trade or a wishlist / collection. If you find any errors in the database, please contact us using the feedback form at the bottom of the page.

T
The Last Crusade: Base Set