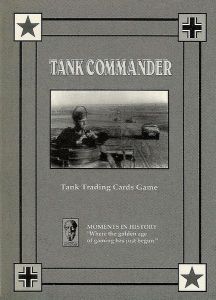 The game is sold in Playing decks of 60 cards each. One Display Box contains 12 Tank Commander Playing Decks.

The game is a simple tactical level card game of warfare with each card representing an individual tank, squad, gun and gun team, etc. There are terrain cards representing all forms of terrain that can be used to build custom scenarios. Also in the mix are special cards like minefields, Panzerfausts, Flank Shots, Snipers, Mine Dogs, Artillery barrages and counter barrages, air strikes, etc. Even though this is a CCG, it plays well with a few starter decks. Deck building is point based with a value assigned to each card so it's not necessarily to one's advantage to have a bunch of high value cards. Also, the rarity mix in the set was supposedly based on the availability of the actual equipment in WWII on the East Front. There are plenty of good common and uncommon cards that are best used to build a deck.

Below is a complete database of the Tank Commander CCG. Click on one of the sets below to view the cards in that set. Click on a card to add it for sale, trade or a wishlist / collection. If you find any errors in the database, please contact us using the feedback form at the bottom of the page.