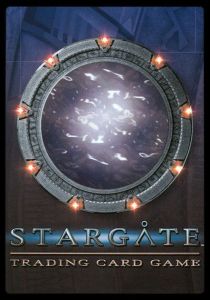 The Stargate Trading Card Game, sometimes abbreviated to Stargate TCG, is a trading card game based on the long-running Stargate series. It released in both online and physical card formats in April 2007. The first set is to be based on SG-1, though upcoming releases will add additional cards from SG-1 and incorporate Stargate Atlantis as well. The Stargate TCG is designed by Sony Online Entertainment and published by Comic Images.

The TCG pulls players into the Stargate universe as they put their favorite characters together to form a team and send them through the gate to accomplish missions. New gameplay lets characters “learn” from their accomplishments and mistakes to increase their capabilities. There are three different ways to possibly win: Earning experience points, collecting glyphs, or scoring Adversaries.

By completing missions, players can play glyphs onto their characters which unlock abilities that could help them win the game.

Below is a complete database of the Stargate TCG. Click on one of the sets below to view the cards in that set. Click on a card to add it for sale, trade or a wishlist / collection. If you find any errors in the database, please contact us using the feedback form at the bottom of the page.

R
Rise of the Ori