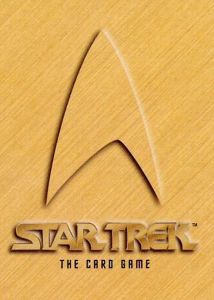 Star Trek: The Card Game is an out-of-print collectible card game by Fleer and Skybox based on the original Star Trek series. It was first released in June 1996. The original set had 306 cards. One expansion was released in January 1997 called Starfleet Maneuvers and had 160 cards. A second expansion called Alien Encounters was slated for a summer 1997 release but never materialized. The game was not compatible with Decipher's iterations of the Star Trek Customizable Card Game.

The gameplay involved acting out an episode using the crew of the U.S.S. Enterprise.

Below is a complete database of the Star Trek: The Card Game CCG. Click on one of the sets below to view the cards in that set. Click on a card to add it for sale, trade or a wishlist / collection. If you find any errors in the database, please contact us using the feedback form at the bottom of the page.