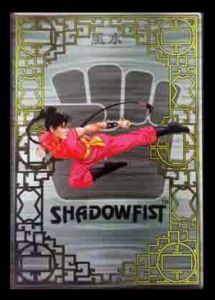 Shadowfist was created by Robin Laws and Jose Garcia. It was released in June 1995 as a collectible card game (CCG), but was shifted to a fixed distribution of cards as of 2013. It shares the same background as the Feng Shui role-playing game, also by Laws and Garcia and released the following year. In September 2018 ownership of Shadowfist switched to Vetusta Games.

Shadowfist is a multi-player asymmetrical strategic game, the design of which is influenced by games such as Cosmic Encounter, Dune by Avalon Hill, Magic: The Gathering and its direct predecessor, On the Edge.

Shadowfist is primarily inspired by Hong Kong action cinema and wuxia films of the late 1980s and 1990s, and by action films in general. In the game, various factions from across time battle for control of the world's Feng Shui sites in a conflict known as the "Secret War." Time travel takes place through an alternate dimension known as the Netherworld which opens to various time junctures. The current open junctures are AD 86, 1867, and 2013. The pulp (1942) and future (2072) junctures were closed with the 2013 Combat in Kowloon release. Unlike Feng Shui, Shadowfist's time junctures move forward as time actually progresses, permitting new game releases to reflect the present.

The titles of cards and the flavor text in the game are rife with humor and pop culture references, especially the Jammers faction, which contains cards such as "Furious George" and "Entropy is your Friend."

Below is a complete database of the Shadowfist CCG. Click on one of the sets below to view the cards in that set. Click on a card to add it for sale, trade or a wishlist / collection. If you find any errors in the database, please contact us using the feedback form at the bottom of the page.

C
Can of Whupass
P
Promo