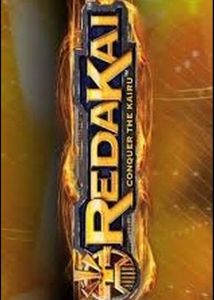 The game of Redakai has two sets of rules, a set of "Basic rules" which plays much like a simple card game where the top card of a deck is flipped face-up to compare powers and another set of rules that utilize the full text on the cards. The cards are made of plastic instead of paper and use a system where several parts of the cards are clear to allow portions of the cards behind them to be revealed, much like the Wizards of the Coast game Hecatomb. The cards also use images created with lenticular printing.

There are three types of cards: Characters, Monsters, and Attacks. Each player starts the game with three Characters. A player plays monsters on their own characters to change their abilities and defenses and play attacks on top of their opponent's characters in order to damage them. When the three yellow "health bars" on a character are filled in red, that character is knocked out. One must "KO" all three opposing characters to win the game. The game's power source, "Kairu", is how the cards are played in the full game.

The card game was released to hobby stores in June 2011 and saw a general release in August of that same year.

Below is a complete database of the Redakai: Conquer the Kairu TCG. Click on one of the sets below to view the cards in that set. Click on a card to add it for sale, trade or a wishlist / collection. If you find any errors in the database, please contact us using the feedback form at the bottom of the page.