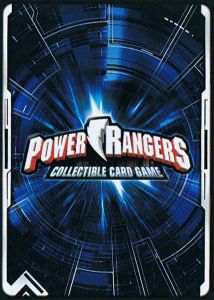 The Power Rangers Collectible Card Game is an out-of-print American trading card game created by Bandai based upon Saban's Power Rangers Series television franchise. It was released in October 2008. The artwork featured on the cards originates from the Japanese Rangers Strike trading card game created in commemoration of the Super Sentai Series's 30th anniversary. Toei's Super Sentai Series television franchise is the primary source of Japanese footage for Power Rangers.

Below is a complete database of the Power Rangers CCG. Click on one of the sets below to view the cards in that set. Click on a card to add it for sale, trade or a wishlist / collection. If you find any errors in the database, please contact us using the feedback form at the bottom of the page.