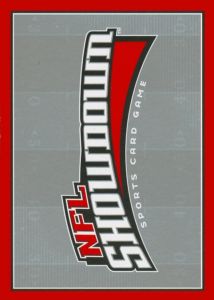 NBA Showdown is an out-of-print trading card game produced by Wizards of the Coast based on the game of basketball. It was released in February 2002. The game is played with customizable decks of cards featuring National Basketball Association players and 20-sided dice. It is one of several sport-themed card games produced by Wizards, including MLB Showdown and NFL Showdown.

The one and only set was released in 2002 and contained 228 player cards (175 of which were designated common, the other 53 rare) and 50 strategy cards. Both starter sets and seven-card booster packs were sold. Approximately one in every three booster packs contains a rare card.

Shortly after the game was released, several coaches in the Indiana Pacers organization participated in the "Front Office Basketball League" (FOBA), a simulated NBA season using the cards.

The game was discontinued after its initial run, though it maintained a small following online via sites such as ShowdownCards.com

Below is a complete database of the NFL Showdown CCG. Click on one of the sets below to view the cards in that set. Click on a card to add it for sale, trade or a wishlist / collection. If you find any errors in the database, please contact us using the feedback form at the bottom of the page.