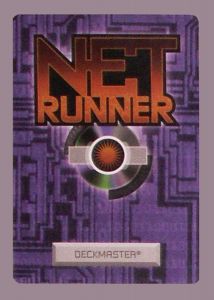 Netrunner is an out-of-print collectible card game designed by Richard Garfield, the creator of Magic: The Gathering. It was published by Wizards of the Coast and introduced in April 1996. The game took place in the setting for the Cyberpunk 2020 role-playing game, but it also drew from the broader cyberpunk genre.

In 2012, Fantasy Flight Games released Android: Netrunner, a new card game based on Netrunner, under license from Wizards of the Coast. The new game uses Fantasy Flight Games' Living Card Game release format (as used in their Warhammer: Invasion, A Game of Thrones, Call of Cthulhu, and Lord of the Rings games), and shares the cyberpunk setting of their Android board game.

Below is a complete database of the NetRunner CCG. Click on one of the sets below to view the cards in that set. Click on a card to add it for sale, trade or a wishlist / collection. If you find any errors in the database, please contact us using the feedback form at the bottom of the page.