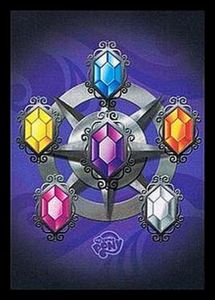 The My Little Pony Collectible Card Game (abbreviated as MLPCCG) is a two-player collectible card game based on the animated television series My Little Pony: Friendship Is Magic. The game is produced by Enterplay LLC under license from Hasbro, and follows from Enterplay's previous work to produce a trading card series based on the same show.

The game requires each player to form a deck with one "Mane" character, 10 Problem cards that earn the players points when solved, and many other cards representing Friends, Resources, and other concepts; these cards are based on characters and other elements from the series. The goal is to play cards from one's hand to face off against any Problems put forth by either player, scoring points for doing so. The player to score a set number of points first is declared the winner. The game is distributed in pre-made one- or two-deck starter packs, and booster packs to expand a player's library. Since its release, the game has received seven major expansions and several themed decks.

The game has generally been well-received, providing an easy-to-learn experience for both the younger demographic of the show as well as the older players including the adult and male fans of the series. Enterplay has stated the game has sold well in the hobby store market and have arranged for various tourneys in such stores and fan conventions.

Below is a complete database of the My Little Pony CCG. Click on one of the sets below to view the cards in that set. Click on a card to add it for sale, trade or a wishlist / collection. If you find any errors in the database, please contact us using the feedback form at the bottom of the page.