Lego Bionicle: Quest for the Masks 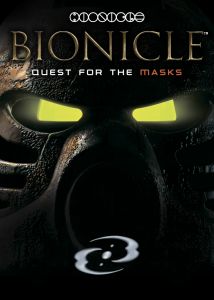 BIONICLE: Quest for the Masks is the first BIONICLE card game released, produced by Tim Muret and Jerry Bennington and designed by Ted Adams in 2001.

The series is comprised of 310 unique game cards, the first 220 from the base game, and the remaining 90 from the Rahi Challenge expansion. Both the base game and the expansion feature standard prints and holographic variants of some cards. Typically the holographic card variants were both rarer and more powerful in-game. However some controversy surrounds card #197 as it appeared to be unobtainable in the First Edition print of the series, and was significantly rarer than other cards in subsequent printing runs.

While the majority of cards printed in the series were playable cards, there were several Illustrated Story Cards depicting moments from the Bionicle series, however as the card-game is not considered canon the events depicted may not be entirely based on the Toa's official storyline.

Below is a complete database of the Lego Bionicle CCG. Click on one of the sets below to view the cards in that set. Click on a card to add it for sale, trade or a wishlist / collection. If you find any errors in the database, please contact us using the feedback form at the bottom of the page.