Legend of the Five Rings CCG 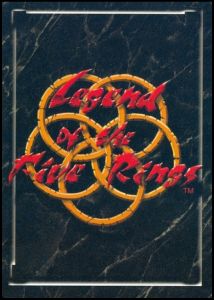 The timeline of the Legends of the Five Rings setting can be influenced by players of the collectible card game, and to a lesser extent the role-playing game, with the winners of major tournaments making pivotal decisions that become canonical history in future products. The most significant example of this was the Race for the Throne event, which took place through 2007 and 2008, which allowed players of both the collectible card game and the role-playing game to affect the storyline of their Clan by earning points in various Spheres of influence.

Legend of the Five Rings LCG

L5R was acquired by Fantasy Flight Games in 2015. They produced the game under their "Living Card Game" fixed distribution model.

Below is a complete database of the Legend of the Five Rings CCG. Click on one of the sets below to view the cards in that set. Click on a card to add it for sale, trade or a wishlist / collection. If you find any errors in the database, please contact us using the feedback form at the bottom of the page.

A
Anvil of Despair

T
Time of the Void

T
The Training Grounds
T
The Battle of Beiden Pass

S
Soul of The Empire

A
A Perfect Cut

A
An Oni's Fury

T
The Fall of Otosan Uchi

W
Wrath of the Emperor

D
Dawn of the Empire

E
Enemy of My Enemy

R
Rise of the Shogun

Race for the Throne - "Samurai"

G
Glory of the Empire

T
The Heaven's Will

T
Test of the Emerald and Jade Championships

P
Path of the Destroyer

B
Battle of Kyuden Tonbo

T
The Dead of Winter

B
Before the Dawn

T
The Currency of War

A
A Line in the Sand

A
A Matter of Honor