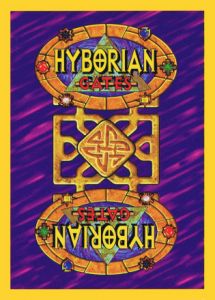 Hyborian Gates is an out-of-print collectible card game by Cardz. It was first released in July 1995. It featured art from Boris Vallejo and Julie Bell but suffered from bad cropping. A total of 450 cards were released in the core set and an additional 10 promo cards were also released. Starter decks contained 110 cards and booster packs had 12 cards. An expansion called Gatemasters was scheduled for a 1996 release but never materialized.

Below is a complete database of the Hyborian Gates CCG. Click on one of the sets below to view the cards in that set. Click on a card to add it for sale, trade or a wishlist / collection. If you find any errors in the database, please contact us using the feedback form at the bottom of the page.