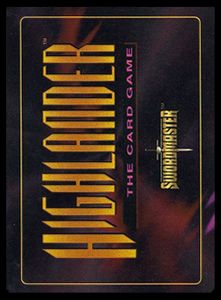 Highlander: The Card Game is an out-of-print collectible card game based on the Highlander franchise of films and television series. Players build decks from a 400+ card set, taking on the persona of one of the Immortals depicted in the franchise.

The core of the game takes the form of a sword duel with players alternately playing attacks and defenses. Other cards are played to affect the basic rules of the game. You win when your opponent is reduced to 0 ability or cannot avoid a "headshot" attack (i.e. decapitation, the only way to permanently kill an Immortal within the franchise canon). An expansion called the Movie Edition was released in mid March of 1996.

Below is a complete database of the Highlander: The Card Game CCG. Click on one of the sets below to view the cards in that set. Click on a card to add it for sale, trade or a wishlist / collection. If you find any errors in the database, please contact us using the feedback form at the bottom of the page.