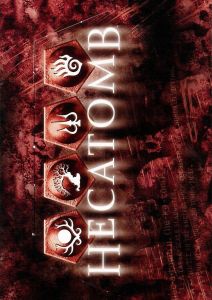 Hecatomb is an out-of-print collectible card game created by Wizards of the Coast. The base set of 144 cards was released on August 18, 2005 at the annual Gen Con Indy. The game is unique in its use of five-sided, stackable cards made of durable plastic as opposed to conventional paper. The original concept for the game is credited to Paul Barclay, Brandon Bozzi, Mike Elliott, Aaron Forsythe, and Robert Gutschera.

In the game, you play a powerful person called an endbringer. An endbringer's goal is to destroy the world by using creatures called abominations to reap the souls of others until he has enough power to bring about the apocalypse. Other endbringers have the same goal and you must battle for the right to bring about armageddon. The person who ends the world gains power and moves on to another world to repeat the process.

Hecatomb shares a number of mechanics with Magic: The Gathering, including the concept of "tapping" mana cards to play other cards of the same color from, and the way attacking and blocking works (with unblocked attacks moving the attacker closer to victory).

The key new game mechanic in Hecatomb is the way abominations are constructed. Abominations are made up of from one to five minion cards, with the minions being stacked on top of each other. Each new minion is rotated as it is played onto an existing abomination. Because of the way the cards are constructed, with five sides and four transparent edges, the cards underneath can continue to be seen, and hence an abomination is a combination of all of their strengths and powers. Bonuses or special effects can be triggered when a minion of the correct color is played on top of the stack (based on the exposed trigger color of the minion which was previously on top).

When abominations fight each other, damage is dealt from the top to the bottom of the minion stack. It is thus possible to have an abomination be reduced in size without being completely killed by having its upper minions destroyed. This adds additional strategy considerations when building up abominations, as one can somewhat protect weaker minions by placing stronger minions above them.

Another mechanic which differs from Magic: The Gathering is the way in which any card can be played as a mana card, alleviating the need to have a certain percentage of cards which do nothing more than power other cards. This mechanic is also used in the Call of Cthulhu Collectible Card Game.

Below is a complete database of the Hecatomb CCG. Click on one of the sets below to view the cards in that set. Click on a card to add it for sale, trade or a wishlist / collection. If you find any errors in the database, please contact us using the feedback form at the bottom of the page.

B
Blanket of Lies