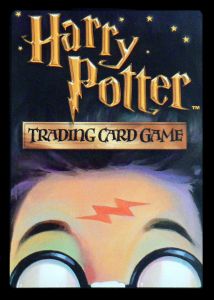 The Harry Potter Trading Card Game is an out-of-print collectible card game based in the world of J. K. Rowling's Harry Potter novels. Created by Wizards of the Coast in August 2001, the game was designed to compete with the Yu-Gi-Oh!, Pokémon and Magic: The Gathering card games. Its release was timed to coincide with the theatrical premiere of the first film in the series. The game was praised for the way it immersed children in the Harry Potter universe. At one point the game was the second best selling toy in the United States; however, it is now out of print.

The game is for two players, each with 60-card decks (with the addition of a starting Character). The aim is to force the opposite player to run out of cards from their deck first. When cards do "damage" to a player, cards from the deck are placed into the discard pile. Each player begins with a hand of seven cards, and draws a card before each of their turns.

Below is a complete database of the Harry Potter TCG. Click on one of the sets below to view the cards in that set. Click on a card to add it for sale, trade or a wishlist / collection. If you find any errors in the database, please contact us using the feedback form at the bottom of the page.