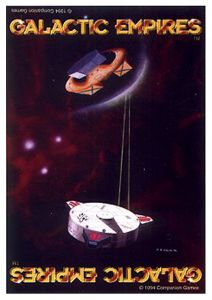 Galactic Empires was one of the "first wave" of collectible card games to come out on the heels of Magic: The Gathering's success. Produced by Companion Games, the first cards were released in August, 1994, and can be difficult to find; however, excepting a few misprints, they were all reprinted in Series II Primary Edition released in December, 1994. A large number of expansions and a revised core set (Series U Universe Edition) were released over the following 2 years; this ended abruptly when Companion Games filed Chapter 7 bankruptcy in May 1997. Carl Schulte, the spokesman for the game, hoped Component Game Systems would have purchased Companion Games and continue the game.

3208 cards were printed altogether, perhaps more than any other collectible card game of the era. These included several hundred promotional cards, some of which can be nearly impossible to track down today. By the time of the game's demise, at least 40 different empires (and 16 distinct "tribes" of one empire, the Indirigan Nomads) had been printed in varying numbers and levels of playability.

Below is a complete database of the Galactic Empires CCG. Click on one of the sets below to view the cards in that set. Click on a card to add it for sale, trade or a wishlist / collection. If you find any errors in the database, please contact us using the feedback form at the bottom of the page.