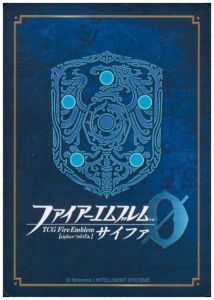 Fire Emblem 0 (Cipher) is a trading card game that features a number of characters from various Fire Emblem games and crossovers, such as Tokyo Mirage Sessions FE and Fire Emblem Warriors. Cipher is developed and published in-house by Intelligent Systems. Unlike the previous card game, Cipher has character cards only, with items, skills, and location cards non-existent. It was released by Nintendo on June 25, 2015 alongside Fire Emblem Fates in Japan.

On April 2, 2020, Intelligent Systems announced that Cipher would be end with the twenty-second expansion released in late 2020.

Below is a complete database of the Fire Emblem Cipher TCG. Click on one of the sets below to view the cards in that set. Click on a card to add it for sale, trade or a wishlist / collection. If you find any errors in the database, please contact us using the feedback form at the bottom of the page.

B
B02 - Divine Flames of Light and Darkness

B
B03 - Hopeward Twin Swords

B
B05 - Surpassing Rivalry

B
B06 - Storm of the Knights' Shadows

B
B07 - Conquering Honor

B
B08 - Life and Death: Beyond Destiny

B
B09 - Thunderous Earth

B
B15 - The Glimmering World

B
B18 - Oratorio of Embarkation

B
B19 - The Holy Flames of Sublime Heaven

B
B21 - Tempest of Apocalyptic Flame