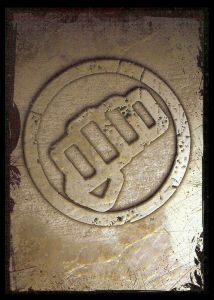 Every set of the game features six playable characters and additional artwork from a variety of licensed properties, such as movies and TV shows. Sets One and Two contain Mr. Blonde of Reservoir Dogs, John Rambo, Ash from Evil Dead, Dr. Hannibal Lecter, Sil from Species and Tank Girl among other heroes and villains. Set Three features characters from the Terminator series, Robocop, Platoon, Jeepers Creepers, and Fargo.

Below is a complete database of the Fight Klub TCG. Click on one of the sets below to view the cards in that set. Click on a card to add it for sale, trade or a wishlist / collection. If you find any errors in the database, please contact us using the feedback form at the bottom of the page.