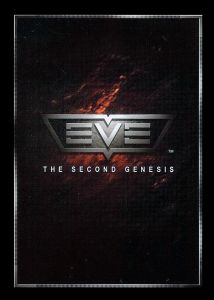 Eve: The Second Genesis is an out-of-print collectible card game set in the universe created for the online game Eve Online. Each player represents the CEO of a corporation, aligned with a particular race, and through exploration, mining, and military strength, their goal is to defeat their opponent CEOs.

Each player begins play with a starbase, located in their home region. Initially, this home region is the only source of ISK, which is the currency in the Eve universe. By playing cards from their hand, each card usually costing a certain amount of ISK, the player can do the following:

Below is a complete database of the EVE: The Second Genesis CCG. Click on one of the sets below to view the cards in that set. Click on a card to add it for sale, trade or a wishlist / collection. If you find any errors in the database, please contact us using the feedback form at the bottom of the page.