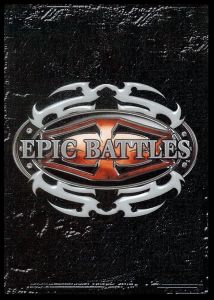 Gameplay is divided into turns of five steps. Unlike most collectible card games, players may take any action on any turn. The goal of the game is to "damage" your opponent with attacks, forcing them to discard cards from their deck. When a player runs out of cards, they lose the game.

Each turn begins with both players drawing three cards. Next, both players set any events they have drawn face down on the table. They may flip these events at the time that the requirements are met (requirements are stated on the event itself). Next, the "aggressor" may play an attack. The other player may play a block to stop this attack or can take damage from it. If the aggressor can "link" their first attack to another one, then they may do so (how this is done is explained below in 'Card Types'). Once the aggressor has ended their combo, the other player has the option of attacking. Battle goes back and forth until both players pass in a row. Once this happens, both players discard cards from their hand down to three and the turn ends.

Below is a complete database of the Epic Battles TCG. Click on one of the sets below to view the cards in that set. Click on a card to add it for sale, trade or a wishlist / collection. If you find any errors in the database, please contact us using the feedback form at the bottom of the page.