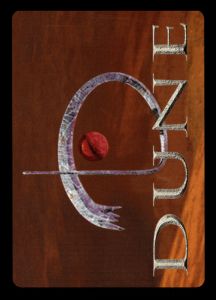 Dune is an out-of-print collectible card game produced by Last Unicorn Games and Five Rings Publishing Group, and later Wizards of the Coast. Set in the Dune universe based on the books written by Frank Herbert, the game pits two or more players against each other, each in control of a minor house vying for entry in the Landsraad.

Originally released in 1997 as Dune: Eye of the Storm by a partnership of Five Rings Publishing Group and Last Unicorn Games, negotiated the license with the Herbert Estate and oversaw the design and art direction of the game. The set included 301 cards available in both starter boxes and booster packs. Although Ally and Homeworld cards were only available in starter boxes, not all Ally cards were included in a given starter (e.g. Piter de Vries, Liscia Theirese), giving rise to the collectable/tradable game element. A small number of Promotional cards were also released to people requesting additional information about the game prior to Eye of the Storm's initial release. All of these cards have "Preview" on the left-hand side of the card face.

When Wizards of the Coast purchased Five Rings later that year, Dune: Eye of the Storm underwent a major shift. In a program called Rolling Thunder, small expansions, called "Chapters", of the game were released every two months. While meant to keep the pace of collecting exciting, it resulted in high duplicate rates in booster packs and a competitive landscape constantly in flux.

In 1998, Wizards of the Coast released two more complete sets, Dune: Judge of the Change (183 cards, covering the arrival of House Atreides on Arrakis) and Dune: Thunder at Twilight (178 cards, covering the reclaiming of Arrakis by House Harkonnen), but the challenging gameplay proved too difficult for younger players. This ultimately lead to the collapse of the Dune CCG. The Judge of the Change expansion introduced three new Factions (the Spice Miner's Guild, the Water Seller's Union, and the Dune Smugglers), and the Thunder at Twilight expansion contained modified House Atreides, House Corrino and House Harkonnen starter sets (reflecting the period in the Dune novel when House Atreides took possession of Arrakis from the Harkonnen).

Two more expansions, Dune: Second Moon Rising (the rise of Paul Atreides) and Dune: Fall of the Padishah (the defeat of Padishah Emperor Shaddam IV), were planned for release in 1998. However, the game was canceled before they were printed.

Below is a complete database of the Dune CCG. Click on one of the sets below to view the cards in that set. Click on a card to add it for sale, trade or a wishlist / collection. If you find any errors in the database, please contact us using the feedback form at the bottom of the page.

Eye of the Storm

E
Eye of the Storm

Judge of the Change

J
Judge of the Change - Chapter 1

J
Judge of the Change - Chapter 2

J
Judge of the Change - Chapter 3