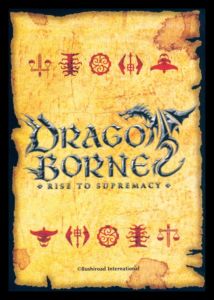 In this two player game, players are to assume the role of a Dragoborne, beings granted power from one of the five reigning Dragolords, who bear their nation’s allegiances and vie with other Dragoborne for honor and glory.

Each player controls three forts that represent their life total. The aim of the game is to destroy all of the opponent’s forts and to achieve this, players can summon fearsome creatures and cast powerful spells to aid their cause. Die values also play a significant part in Dragoborne -Rise To Supremacy-, making the skillful manipulation and usage of dice a key component of gameplay.

Below is a complete database of the Dragonborne: Rise to Supremacy CCG. Click on one of the sets below to view the cards in that set. Click on a card to add it for sale, trade or a wishlist / collection. If you find any errors in the database, please contact us using the feedback form at the bottom of the page.

B
BT02 Oath of Blood

B
BT03 Gears of Apocalypse

B
BT04 Surge of Titans

B
BT05 Reckoning of Vashr