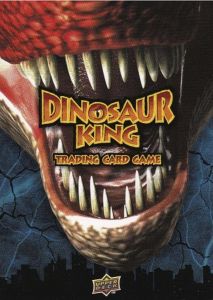 The Dinosaur King TCG was created by 4Kids Entertainment in conjunction with Upperdeck; as of such, there is no Japanese Trading Card Game (partially because Japan's TCG is pretty much their arcade games). Its earliest editions were released at some point during 2008, with up to 3 booster sets released each year at regular intervals.

Below is a complete database of the Dinosaur King TCG. Click on one of the sets below to view the cards in that set. Click on a card to add it for sale, trade or a wishlist / collection. If you find any errors in the database, please contact us using the feedback form at the bottom of the page.