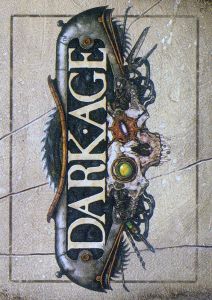 Dark Age is an out-of-print collectible card game by Friedlander Publishing Group (FPG) and was released in July 1996. The game shared themes with the Mad Max franchise and featured work from artists such as Gerald Brom and Tim Bradstreet. FPG intended for Dark Age to be released as three compatible stand-alone games. The first stand-alone set titled Feudal Lords contained 231 cards and was sold in 65-card starter decks and 10-card booster packs. Two promo cards were also available. The second stand-alone set called The Brood had 225-cards and was scheduled for an October 1996 release but never materialized. The Brood had artists returning from Feudal Lords and the game was to focus on growth numbers used to increase a Brooder's size (a Brooder was a genetically engineered creature run amok). An expansion meant to support both sets was scheduled for a 1997 release also never made it to production.

Below is a complete database of the Dark Age: Feudal Lords CCG. Click on one of the sets below to view the cards in that set. Click on a card to add it for sale, trade or a wishlist / collection. If you find any errors in the database, please contact us using the feedback form at the bottom of the page.