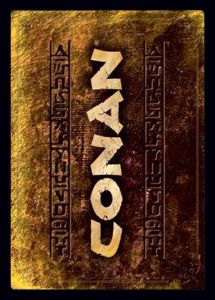 The Conan Collectible Card Game is an out-of-print collectible card game set in the fictional Hyborian Age of Conan the Barbarian. The game was designed by Jason Robinette, and produced by Comic Images and released in 2006.

Each player in the Conan Collectible Card Game takes on the role of Conan, attempting to earn renown throughout the land for his deeds and adventures. While each player has his or her own Conan, they are considered to be in parallel dimensions, so each exists only when it is the respective player's active turn. During this time, the opponent takes on the role of Conan's foes, attempting to defeat Conan. Victory is achieved either through earning 40 renown for one's own Conan, or through defeating the opponent's Conan.

This mechanism, where a player controls the hero forces during their turn, and the enemies during the opponent's turn, is also used in games such as The Lord of the Rings Trading Card Game.

Below is a complete database of the Conan CCG. Click on one of the sets below to view the cards in that set. Click on a card to add it for sale, trade or a wishlist / collection. If you find any errors in the database, please contact us using the feedback form at the bottom of the page.