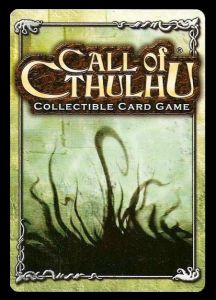 Call of Cthulhu: The Card Game (formerly the Call of Cthulhu Collectible Card Game) is an out-of-print card game produced and marketed by Fantasy Flight Games. It is based on Chaosium's Call of Cthulhu role-playing game, the writings of H. P. Lovecraft, and other Cthulhu Mythos fiction.

It shares art and characters with FFG's other Cthulhu Mythos products Arkham Horror and Elder Sign. It was designed by Eric Lang as a more accessible introduction to gaming in the Mythos environment and to provide a fast and lively interplay with the usual elements of the mythos (e.g. arcane tomes and secrets, paranormal investigations, the Elder Gods and their terrible servants, dark sinister plots, inhuman conspiracies, and dangers from beyond the stars). The game is nominally set in 1928.

FFG staffer Darrell Hardy developed the storyline background for the game. Most of the storyline text (including card names and flavor text) is written by creative developer Pat Harrigan.

In 2008, Fantasy Flight began moving it's CCGs over to the LCG model. This removed the random element of booster packs in favor of fixed content expansion packs. The Call of Cthulhu LCG game continued with this model until 2015 when FFG discontinued support for the game.

Below is a complete database of the Call of Cthulhu CCG. Click on one of the sets below to view the cards in that set. Click on a card to add it for sale, trade or a wishlist / collection. If you find any errors in the database, please contact us using the feedback form at the bottom of the page.