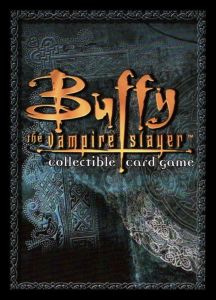 As of 2006, the game continues to have an active player base. Virtual expansions, or "dream cards" are created and approved by a players committee known as the Watchers Council Association. They are also responsible for worldwide player rankings, current rulings, and tournament organization and support.

Below is a complete database of the Buffy the Vampire Slayer CCG. Click on one of the sets below to view the cards in that set. Click on a card to add it for sale, trade or a wishlist / collection. If you find any errors in the database, please contact us using the feedback form at the bottom of the page.

A
Angel's Curse
C
Class of '99
S
Slayer on Campus