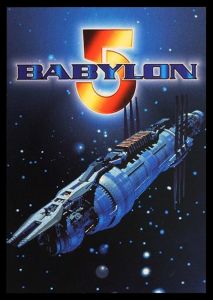 The Babylon 5 Collectible Card Game (B5 CCG) is an out-of-print collectible card game set in the Babylon 5 universe. The game is ideally set for 4-5 players but can be played with a minimum of two players up to as many as 20 if using multiple Non-Aligned Factions and Home Factions.

This CCG is distinct from most others of the genre for being specifically designed to be played by more than two players. The gameplay tends to have strong political elements encouraging significant player interaction aka "table talk" which is appropriate for a game based on a series which featured such a strong element of political intrigue.

During its brief six-year existence under the Precedence Entertainment banner it released two core sets, five expansions sets and one revision set. There were two World Championships during that time.

A number of fan sets have been created and there is an active Facebook group led by Bruce Mason, one of the senior Rangers, that is re-imagining the game under the name the B5 Virtual Card Game (B5VCG). So far they have produced three expansions, 'AnlaShok', 'The Vorlons' and 'Signs & Portents'. They have also done an extensive rewrite of the rules, called the 'Engine Edition'.

Below is a complete database of the Babylon 5 CCG. Click on one of the sets below to view the cards in that set. Click on a card to add it for sale, trade or a wishlist / collection. If you find any errors in the database, please contact us using the feedback form at the bottom of the page.