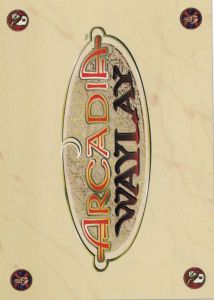 Arcadia is an out-of-print collectible card game involving combat and terrain, released in August 1996 by White Wolf, Inc. It is based on the world of the fae, who are changelings that draw on the dreams of humans. Quests, delineated and represented by cards, are completed by cards similarly representing Characters moving from one Terrain card to an adjacent one until the Quest is completed. The base set was called The Wyld Hunt and was sold only in booster packs. A single expansion set was released and called King Ironheart's Madness. An expansion called The Lion's Den was scheduled for a June 1997 release but never materialized.

Below is a complete database of the Arcadia CCG. Click on one of the sets below to view the cards in that set. Click on a card to add it for sale, trade or a wishlist / collection. If you find any errors in the database, please contact us using the feedback form at the bottom of the page.